A LaGuardia Community College library guide about the incarceration of Japanese Americans during 1941-1946.

The La Guardia and Wagner Archives blog posting on Mayor Fiorello La Guardia and his refusal to allow Japanese Americans to relocate to New York City after the closure of the internment camps provides a clear and direct summary of an important moment in Asian American history: "Mayor La Guardia, Japanese Internment and World War II: 70 Years Later."

Links are provided to resources such as: 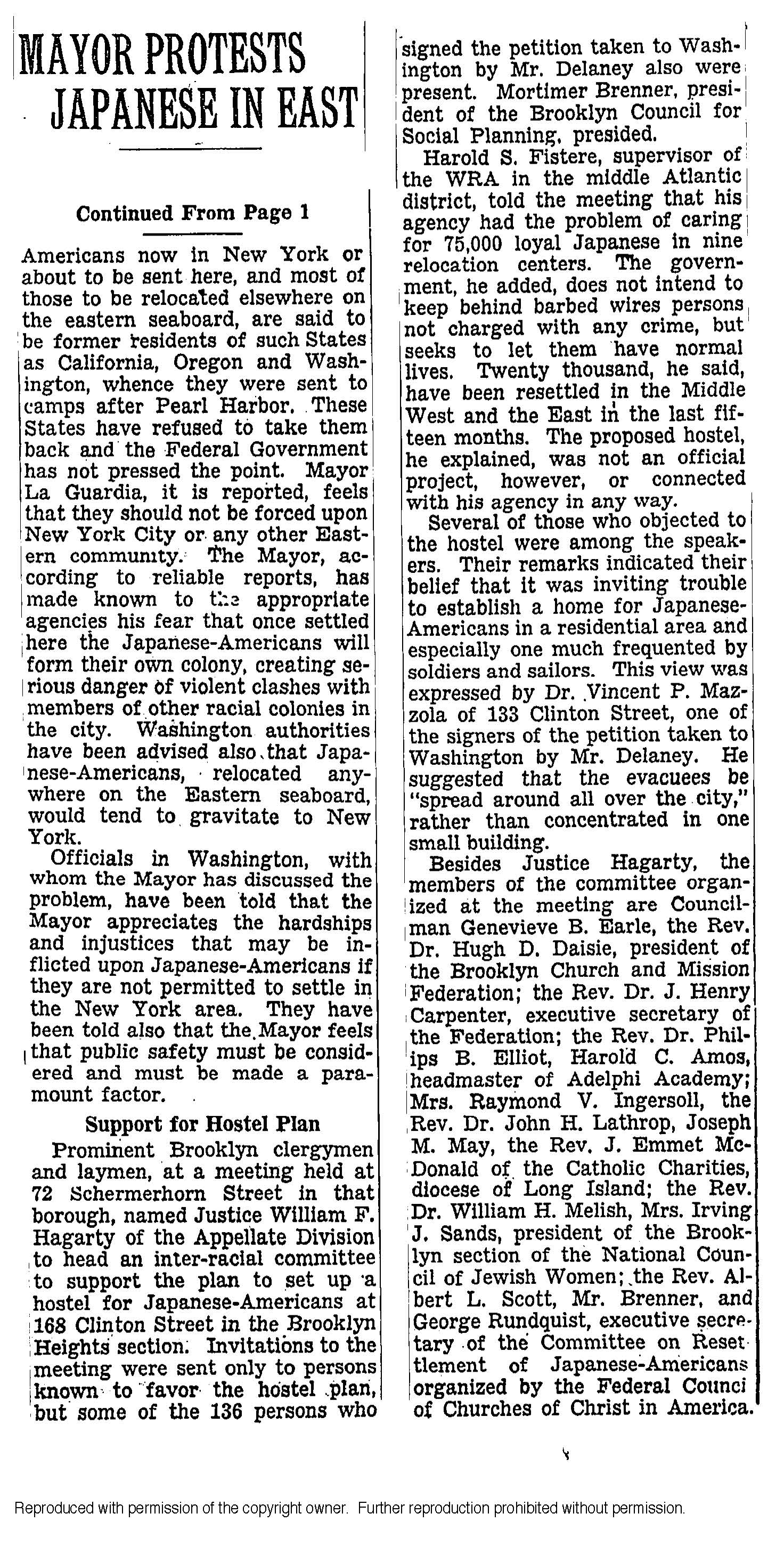 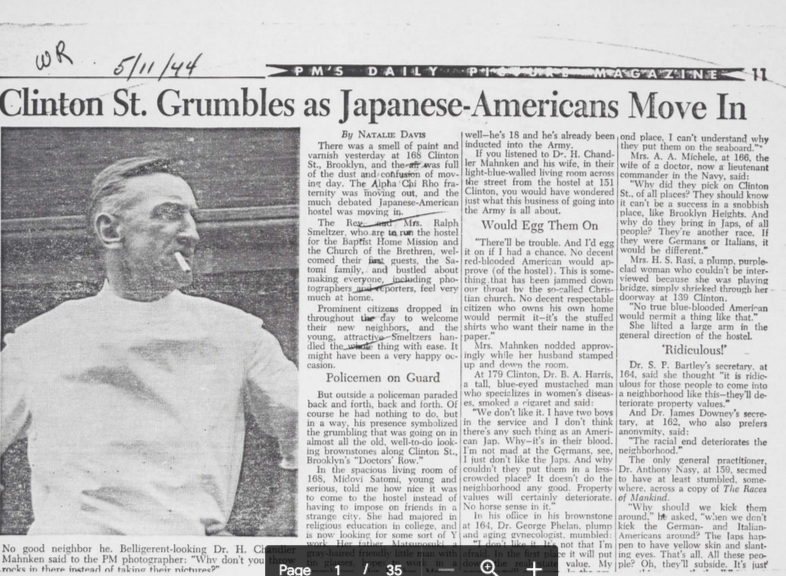 Documents in chronological order
People of Japanese ancestry in NYC before WW II numbered about 2,000. A
majority of them were Issei (born in Japan). This was the only American city with
that imbalance. All others had a majority of Nissei. A report by the Bureau of the
Census showed approximately 1400 foreign-born Japanese among the 2,000 plus
total Japanese in NYC in 1940, These NYC residents were primarily Japanese
consular officials and businessmen.
At this time, LaGuardia served both as mayor of New York City and as Federal
Director of the Office of Civil Defense.
After December 7, 1941, LaGuardia spoke on WNYC radio and explained the city’s
policy toward its Japanese residents:
“We must not and cannot feel secure. On my own responsibility I have ordered
all Japanese subjects to remain in their homes. My friends, we must toughen
up. We have our homes and our land to defend.”
Agents of the FBI acting upon orders from the Department of Justice rounded up
Japanese nationals and interned them on Ellis Island and later at Camp Upton on
Long Island for an undetermined term. More than 1,000 prewar businessmen and
community leaders were arrested as potentially disloyal. LaGuardia convened his
Emergency Board and directed that Japanese nationals be confined to their
homes pending decision as to their status and he closed their clubs and other
meeting places and put under police guard.
In our collection of Mayor LaGuardia’s papers there is a letter dated Dec. 15, 1941
from the Assistant Director of the FBI to Mayor LaGuardia commending the
cooperation and assistance rendered by the NYPD to the FBI agents in connection
with the apprehension of enemy aliens (Japanese, German, and Italian).
In January, 1942 Attorney General Francis Biddle wrote LaGuardia to ask him to
make a national radio broadcast announcing to the 1,100,000 aliens of enemy
countries the requirement of re-registering as alien enemies and obtain a
“Certificate of Identification”.

Staffing Shortages and Japanese Relocation from the Camps

The war created particular shortages in hospital staffing. In December, 1942,
LaGuardia received a suggestion from the Alien Enemy Control Unit to employ
American citizens of Japanese ancestry presently in relocation centers on the
west coast. The War Relocation Authority seconded this idea, as hospitals in Salt
Lake City, Denver, St. Louis, Rochester, Minn, and Madison, Wisc. were employing
evacuees as nurses, nurses’ aides, and as maintenance employees. In February,
1943, LaGuardia wrote the director of the War Relocation Authority agreeing to
initially hire 50 hospital helpers at the SeaView hospital on Staten Island, a
tubercular hospital. There were currently 3,800 vacancies in the 29 municipal
hospitals. LaGuardia however wrote: “While I feel that this program offers
definite possibilities in alleviating the desperate manpower shortage now
existing in the City’s hospitals, I believe that it would be wise to proceed slowly
in the assignment of these individuals.”
The salaries offered however did not match the difficult and long working hours
involved for these positions – 20 hospital helpers with maintenance at $660/year
and 30 on a living out basis at $960/year. Most of the jobs were in the kitchen and
presumably would not have any contact with the tubercular patients. In April,
1943 the relocation supervisor wrote to the Commissioner in the NYC Department
of Hospitals that there were no application for these positions –most likely due to
the low salary and the hospital treating solely tubercular patients.
In 1944 the Supreme Court ruled that the inhabitants of the detention camps
needed to be released. By March, 1944 about 7,000 of the 112,000 people of
Japanese ancestry in the camps had been relocated to Rocky Mountain states
(mainly Utah and Colorado) and more than 12,000 to the Great Lakes region,
primarily Illinois, Ohio, and Michigan. The most popular city was Chicago, which
took in more than 3,500 people. Denver, Salt Lake City, Cleveland, Detroit, and
Minneapolis also took in people. New York City, the nation’s largest city ranked
only 7 th , having accepted only 406 newcomers.
In April, 1944 Mayor LaGuardia exchanged a series of letters with Harold Ickes,
the Secretary of the Interior and Under Secretary Abe Fortas (future Associate
Justice of the Supreme Court) in which he expressed his firm rejection of
relocating Japanese to New York. LaGuardia wrote on April 11, 1944, “I want to
formally record my protest against the present plan to take these people from

concentration camps and locate them to cities in the East. I am naturally
speaking for New York City. If these people are to be trusted to the extent of
being released from concentration camps, then they should be permitted to go
to the places from which they were taken. In many instances they were forced
to sell their property at great sacrifice because of the short notice given in the
Evacuation Orders. . . I submit however, that it is manifestly unfair to turn these
people loose, and because the western states do not want them back, to force
them upon New York City. When war broke out I was faced with the difficult
problem of several hundred thousand enemy aliens. I did not ask the U.S.
government to take these people and dump them on the Pacific Coast. . . You
also must know that the racial situation (Harlem Riots in 1943) is such in NYC as
to make it extremely dangerous for the mass transportation of Japanese to this
city. There is a question of housing them as well as the friction which will be
erected when these men and women enter into a competitive labor market. The
mere fact that some have already arrived has created a new police problem. . . I
must therefore insist that measures be taken immediately to stop permanently
the transportation of these relocated Japanese. . . this is not a temporary
question. It is a permanent one and it must be settled permanently.
Secretary Ickes’ response: “I am left with the definite impression that you have
not been fully advised regarding the status of these people. . . The people of
Japanese ancestry . . . are not inmates of concentration camps. They are a
dislocated group of people whose only “fault” is that they are of Japanese
descent and that they happened to be living in a highly sensitive military area
shortly after the outbreak of war. . . Of the 21,000 people who have been
relocated, only about 600 are now living in NYC. This is much less than the
number received in several Midwestern cities and, in proportion to the total
population of NY, seems an insignificant number. The largest monthly
movement into NY took place in March, 1944 and consisted of 123 people. If we
should attempt now to cut off all relocation into NYC . . . the repercussions of
such a move would almost certainly be tremendous. In view of the national
prominence of NY and particularly in view of your own great reputation as an
opponent of racial discrimination, the action would be certain to attract
nationwide and even international attention. In this country it would probably
set a precedent that might be disastrous to the whole relocation program, and it

would come as a distinct shock to the church groups, labor organizations, and
other groups which have been vigorously supporting that program.
Indeed, LaGuardia’s opinion provoked outrage in other cities. The St. Louis Post-
Dispatch carried an editorial on May 22 titled, “Mr. LaGuardia’s Slip,” in which it
argued that LaGuardia had “prejudiced his prestige with many who have
supported him on public issues in the past. Further, such a stand lowers the
prestige of a city which has long prided itself on its tolerance . . . Let the Mayor
ask himself once again whether American citizens of any race shall live under
the protection of a democratic constitution or be persecuted in spite of it. In
Japan it might be seized by the military as a pretext for further maltreatment of
American citizens and would almost surely be used as a propaganda device in
convincing other Oriental nations that the United States is conducting a racial
war. Among peoples of the other United Nations it might be interpreted as
evidence of a serious flaw in American democracy.”
An editorial in the Milwaukee Journal wrote about the 50,000 people of Japanese
ancestry still in relocation centers, “This is a disgrace. We might as well be
honest with ourselves and admit that race prejudice is behind the situation –
not a well-based fear of sabotage or espionage”
When members of a Japanese family attempted to relocate to Brooklyn Heights
under the sponsorship of several church groups, LaGuardia protested to the War
Department, the War Relocation Authority and the Navy, claiming the site was
too close to the Brooklyn Navy Yard, war plants, airports and transportation
facilities. The NAACP and the ACLU charged LaGuardia with race hate.
C.C. Burlingham a leading New York lawyer, LaGuardia advisor and main mentor
chastised the mayor in a series of letters. In one he wrote, “I am awfully put out
by your reported opposition to the settlement of Japanese-Americans in
Brooklyn. You are absolutely drippingly wet. There is not the slightest danger
from these men who are as good American citizens as you or I.” A week later, he
wrote LaGuardia, “you are in bad company and the sooner you clear yourself the
better. This is not a case for stubborn insistence but for penitence or subtlety. . .
I am certain that you will not find the high officials and officers of the War
Department in Washington have any fear that the presence of Japanese
Americans on the Eastern Seaboard involves peril to anyone. The truth is that

The Japanese-Americans should never have been evacuated from California.
General DeWitt’s orders were due to the pressure of the Hearst newspapers and
the hysteria of the Sons of the Golden West and other large farm organizations
which fear the competition of cheap labor.”

Curricula from the LaGuardia & Wagner Archives: 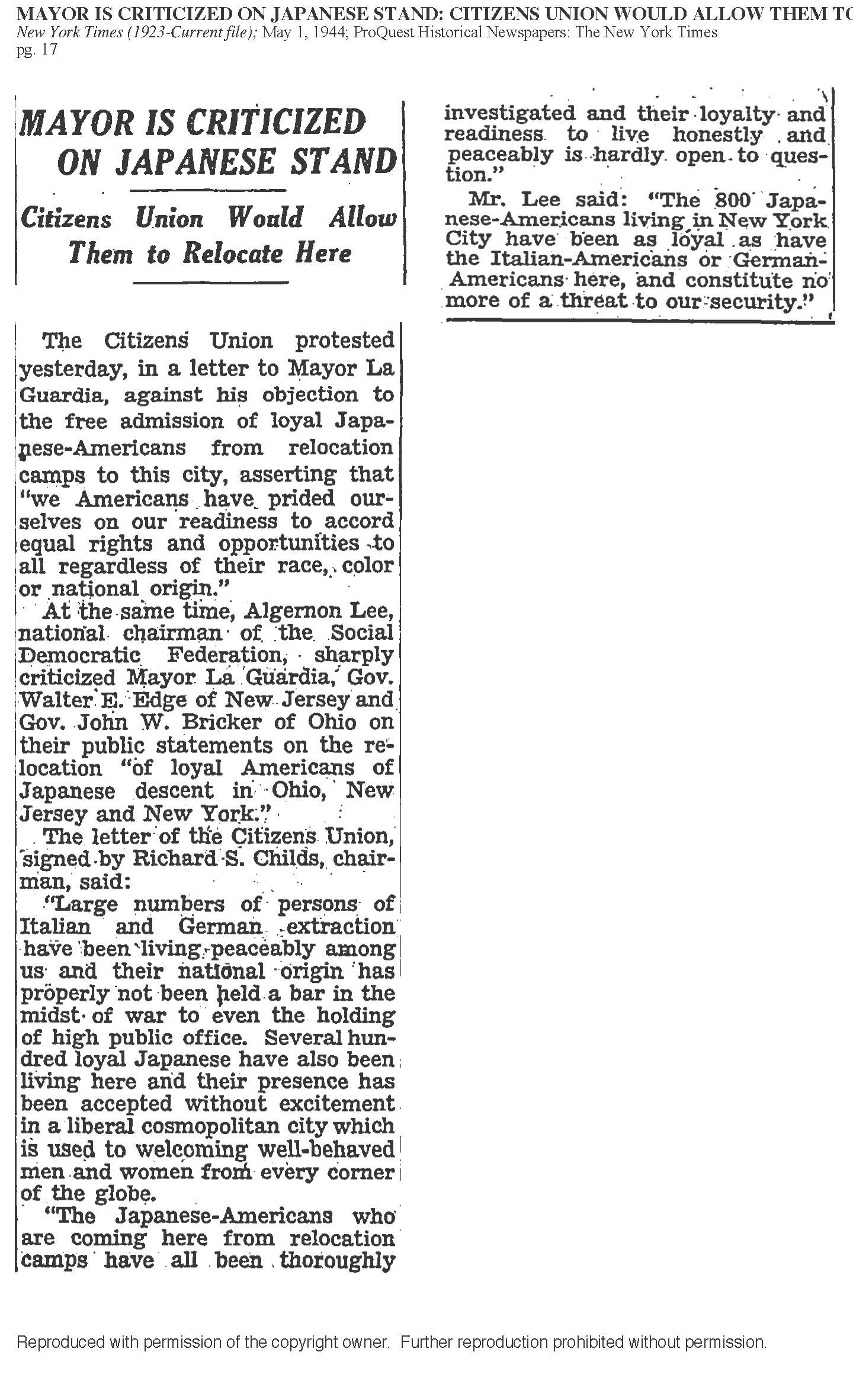